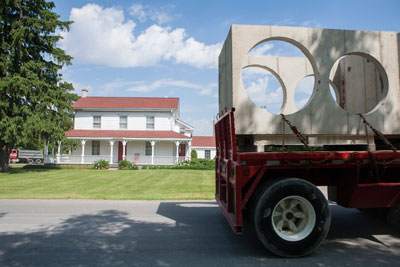 Coldstream Concrete is a family run business.  Chester Brown began to produce concrete drain tile for local farmers under the name Coldstream Concrete in 1945.  The company started on the family farm as a completely manual operation.  The operation became more and more mechanized and when the market peaked in 1980s, Coldstream was operating three drain tile making machines all year long  and was the largest supplier of concrete drain tile in Ontario.   It was also during that time when Chester’s son, Bob Brown, took over the business.

Bob decided to enter the sewer and watermain market in the early 1990s.  The company started out with small and medium-sized manholes and catchbasins after building a modern plant.  In early 2000s the company entered the heavy precast marketplace undergoing another expansion, adding large manholes, headwalls, valve chambers and box culverts to their product line.  “We always seemed to expand in manageable pieces,” said Bob brown who had managed the business for the past 35 years.  In 2002the third generation joined the company as Amy Koteles, Bob’s daughter came on board.

Even though Coldstream may be the “little guy” in the industry it is one of the largest employers in the Municipality of Middlesex Centre, which boarder the City of London o the west, north and east sides.  The majority of its 75 employees reside in the City of London with the remainder sprinkled around the surrounding communities including  Strathroy, Ilderton, Komoka and Parkhill.